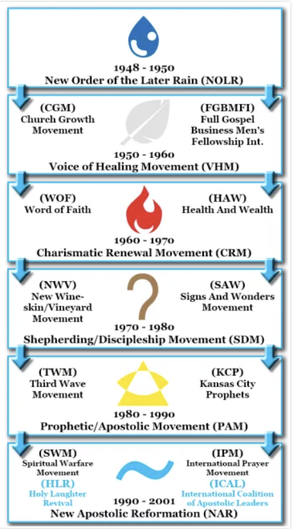 Timeline from churchwatchcentral.com
Teachings rooted in the New Apostolic Reformation or NAR are coming to a church near you or, have already arrived.

Due to its use of Bible verses and familiar sounding Christian words, many Christians don't recognize the N.A.R doctrines of demons. It's proponents seek to revive your "dead, religious," church by taking it to new realms, with light shows, healing spectacles, glory clouds, vision casting, seed sowing, holy laughter, and deep secrets of the kingdom. But there are no new secrets of the kingdom. Only men like William Branham who planted seeds of sorcery and divination into Christendom, paving the way for a great apostasy.

William Branham began a 'healing revival' evangelistic ministry in 1946. Branham, who at the time, was outside of mainstream evangelists like Billy Graham, did not grow up in a Christian home.  In his early twenties he attended a church that taught modalism, which helped shaped his theology. Branham once said:

"The Spirit left Jesus in Gethsemane and He became just a man– When God looked down upon the body… (The Spirit left Him in the Garden of Gethsemane; He had to die a man.)”
–It Is the Rising of the Sun, April 18, 1965”

It is important to note that Jesus never lost his divinity. To state otherwise is heresy.

According to Branham, his parents who dabbled in the fortune-telling, told him he was born with a halo or “angel of light” over his head. He had another encounter at age seven in which a voice told him not to defile his body with smoking or drinking because he would have work to do when he was older.

"For such people are false apostles, deceitful workers, disguising themselves as apostles of Christ. And no wonder! For Satan disguises himself as an angel of light." (2 Corinthians 11:14)

Branham believed he was telepathic and could discern the desires of people’s hearts. This is occult clairvoyance, not Christianity.  He also believed that the evidence of the Holy Spirit necessarily included manifestations, miraculous healings, and visible, emotional spiritual encounters. He believed that those who belonged to church denominations were of the anti-Christ. Branham purportedly had more visions and angel visitations into adulthood, which led him to start his ‘healing revival’ tours.

This is not unlike Joseph Smith and other pseudo-Christian cults, whose founders were met by angels with secret words from supposed messengers of God.

Upon attending one of Branham’s healing revivals, George Hawtin, a minister who had recently resigned from the Pentecostal Assemblies of Canada, became enamored with the zeal, manifestations, and teachings on gifts that he thought was missing in orthodox Pentecostal doctrines. Hawtin, along with two other ministers, Percy Hunt and Herrick Hult, was further encouraged when he read a book by Franklin Hall called 'Atomic Power with God through Fasting and Prayer.'  Hall taught that Christians could obtain "body felt salvation” (whatever that is) and perfect health. We just need to know how to access it. The book included a “how to” on connecting your spirit to body, also, receiving an outpouring of the “oil of the spirit.”

None of this is biblical. None of it.

Sadly, the pastors Hawtin, Hunt, and Hult introduced the book and its practices to the Sharon Orphanage School that they oversaw. After following the steps of Franklin Hall’s book, the students and faculty began seeing visions of Jesus, laying hands on one another to “impart blessings of the spirit,” and experiencing “holy laughter.” Soon after, the school was no longer a school. Classes were replaced with healing, vision, and prophesying sessions.  The public had become aware of the movement, many labeling it a cult.

By 1949, the “New Order of the Latter Rain” movement as it was called, based on Joel 2:23, had spread rapidly in Canada and the US, creating factions within the Pentecostal denomination; some embraced the new doctrines (gift impartations, slain in the spirit, words of knowledge, etc.), while others rejected it. The General Council of The Assemblies of God in the USA eventually convened and warned that the new movement was altogether unbiblical and heretical. Although today, some AOG congregations and other more orthodox Pentecostals have unwittingly embraced the heresies they once rejected. Not to be outdone, some Baptists and Reformers have jumped in as well


By 1952, the New Order Latter Rain movement seemingly began to dissipate. But in the 1960s it took on a new name; the Charismatic Revival movement. Their doctrines on visions, tongues, and spirit visitations expanded along with new branches of the N.O.L.R.  The Shepherding/Discipleship branch of the N.O.L.R was birthed in 1970 and introduced spiritual coverings, covenants, spiritual fathers/mothers, and orphan spirit. This movement gave way to many cults of the 1970s like Jim Jones’ People’s Temple and David Koresh’s Branch Davidians.

Today, the NOLR cult has morphed into what has been dubbed the New Apostolic Reformation (N.A.R) by Peter C. Wagner.  Wagner, a promulgator of Dominion and Kingdom theology and author of the book 'The New Apostolic Churches,' stated that he researched this movement for quite some time. Because there were so many independent churches with similar teachings, he thought the movement should have a name. Wagner stated:

“I use “reformation” because, as I have said, these new wineskins appear to be at least as radical as those of the Protestant Reformation almost 500 years ago. “Apostolic” connotes a strong focus on outreach plus a recognition of present-day apostolic ministries. “New” adds a contemporary spin to the name.”
--Sources: Apologetic.org, C. Peter Wagner, ed. Excerpt from, 'The New Apostolic Churches,' via Global Harvest Ministries internet archives
​

The NOLR that began in the 1940s has matured as a giant tree with many branches bearing wax fruit.

While the N.O.L.R. timeline (above image) shows when these different branches began an ended, you should know that they have all indeed lived on (see my testimony), and have culminated into the N.A.R.  Many within this cult (even some leadership) are unaware that they're in a cult; woefully and willfully ignorant of its man-made doctrines. The different branches may even use their particular sect's focus (i.e. destitution/sacrifice vs prosperity) to try and separate themselves from the other N.A.R groups; casting themselves as more pious and less showman. But don’t be fooled, they are all from the Latter Rain tree.

The movements on the timeline encompass the following N.A.R. theologies:
​
The following is an inexhaustive list of N.A.R. beliefs, practices, and terminology of which you should be aware:

​
Again, not an exhaustive list but if any of these are commonplace in your church's vocabulary, be very concerned.

I initially took to the task of creating a chart of the different N.A.R branches and their specific beliefs to include in this write-up. However, I realized three-quarters of the way in that almost all the doctrines, terms, and practices cross-over within the various N.A.R. groups.

The tentacles of the N.A.R cult stretch far and wide. It's spiritual sounding terms and "deep" knowledge seeks to deceive those who need the true gospel and make apostates of the chosen, if possible. Beware of movements that claim God is doing a new thing or rehashing an old thing in order to right the wrongs of  "the dead religious spirit"...and it’s only through them.

​Despite what William Branham and his successors espouse, God is not doing a new thing and neither are they. It’s the same mystical, secret, revelatory Gnosticism that has plagued the world since the serpent seduced Eve in the Garden of Eden.

"But among the people there were also false prophets, just as there will be false teachers among you. Under false pretenses they will introduce destructive heresies, even denying the Master who bought them, and thus bring on themselves swift destruction.  Many will follow their debaucheries; and because of them, the true Way will be maligned. In their greed they will exploit you with fabricated stories." (2 Peter 2:1-3)